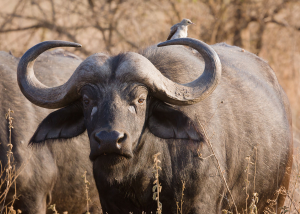 African Buffalo, also known as Cape Buffalo can be found throughout Southern Africa, nick named “Black Death” they are very aggressive and dangerous animals. They can weigh up to 900kg with a shoulder height of up to 1.8m, with horns that can grow to be 1 meter wide. Buffalo typically live in herds that are made up of different groupings, the main herd is made up of related females and the dominant bull who are surrounded by smaller herds of younger bulls and older members o…f the herd.

Some of the older bulls in the herd will be forced out of the herd to live a solitary life, commonly known as Dagga Boys. These bulls are dangerous and have been known to attack and kill local villagers and big game hunters, they are even known to disappear into the bush and to circle back to stalk and ambush hunters.

The African Buffalo has numerous vocalizations including sounds that signal the herd to move and change direction, the herd will also respond to distress calls from members of the herd. Buffalos engage in mob like behaviour when responding to distress calls and will challenge and attack any predator, typically lions.